4 reviews
The ultimate mountaineering backpack from Grivel, fully equipped for all your mountain adventures. Various practical solutions allow you to carry all your equipment in a functional way.
Add to cart

$130.91 $111.27
The Grivel Ski tour Evo crampons are designed for ski mountaineering where weight is always very important, but where robust equipment is also needed.
Add to cart

$74.98 $63.73
The Trend Denim harness by Grivel is a sports harness that combines technology and comfort with a trendy and innovative look.

$74.98 $63.73
The Trend Black harness by Grivel is the innovative sports harness with a buckle that combines technology and comfort with an innovative fashion look to best express your personality and your original way of climbing.

$74.98 $63.73
The Trend Python harness by Grivel is the innovative sports harness with a buckle that combines technology and comfort with an innovative fashion look to best express your personality and your original way of climbing.
Add to cart

1 review
G14 crampons combine the technical performance of forged, vertical frontpoints with the low profile, collapsible frame of the G-12 to make an altogether fresh, modular, and customizable crampon suited to many climbing disciplines.
Add to cart

$100.25 $81.94
The Grivel G10 crampons are suitable for all mountaineers, even those in their first experiences in a glacial environment.
Add to cart

$100.25 $81.94
The crampons G10 wide Evo by Grivel is the crampon designed for snowboarders, telemarkers and all activities that require the use of a little more bulky shoes. 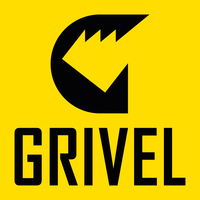 When Grivel invented and began making the world’s first modern crampons, based on the designs of Oskar Eckenstein, over 80 years ago they manufactured from the best quality steel that could be found....

Grivel is synonymous with mountain climbing.

When it comes to the Ice, one can only think of Grivel

In 1818 the Grivel family of blacksmiths started to transform their production of agricultural tools to satisfy the rather peculiar demands of a new breed of wealthy tourists who, for unfathomable reasons, wanted to climb the mountains! So the Grivel ice axe came into being surrounded by skepticism. The English engineer Oscar Eckenstein was received with similar skepticism when in 1909 he asked Henry Grivel to manufacture the first modern Grivel crampons. In 1929, Henry’s son Laurent made the brilliant invention of the two front points, allowing climbers to stand face on whilst attacking the steep ice and snow gradients. This innovation was the key to the conquest of the last unsolved route of the Alps: the North of the Eiger, 21-24th July, 1938.

In 1936, in collaboration for the first time with the Cogne steelworks, Amato Grivel, Laurent’s younger brother, using the Chromolly alloy (Nickel-Chrome-Molybdenum), created a really strong Grivel crampon, thinner and therefore lighter. They forged Grivel crampons weighing 360 grams a pair, up until then impossible. These Grivel crampons, the Super Leggero Grivel, have been used to conquer the 3 highest peaks in the world, the Everest, the K2, and the Kangchenjunga.

In 1982 new blood took over a rather sleepy, uncompetitive Grivel that had allowed itself to be overtaken by rival companies. New management led by Gioachino Gobbi was convinced that over a hundred years of tradition, the brand name and the company’s location were a recipe for future success.

1996 = The Machine: the Grivel ice axe that revolutionized the design of technical tools. From now on this was the shape that all manufacturers would use.

In 2003 Grivel crampons resolve the problem of snow build up under crampons with the first pro-active anti-balling plate.

Today 196 years later, Grivel, still basically one large family, continues in its balancing act between tradition and progress, between forging and aerospace technology, between intuition and R&D.

Grivel Mont-Blanc has achieved all possible certifications: from TUV GS (Sichereit Gepruft) for product quality to ISO 9001-Vision 2000 for our management system and even the ISO 14001 environmental Certification for Environmental Compatibility.

In May 2009 the company opened a new production unit in a much bigger space where it is easier to manage the different lines of production. This will help our flexibility in the face of the new demands that come in daily from around the world. This new set up means that we can widen our range of products and maintain our avant-garde position in the marketplace.

The new location has allowed us to change to solar energy making our production cleaner and more eco-friendly. Since 2010 all the energy needs are produced by our photovoltaic panels.
Every year they save 1,173 barrels of oil!